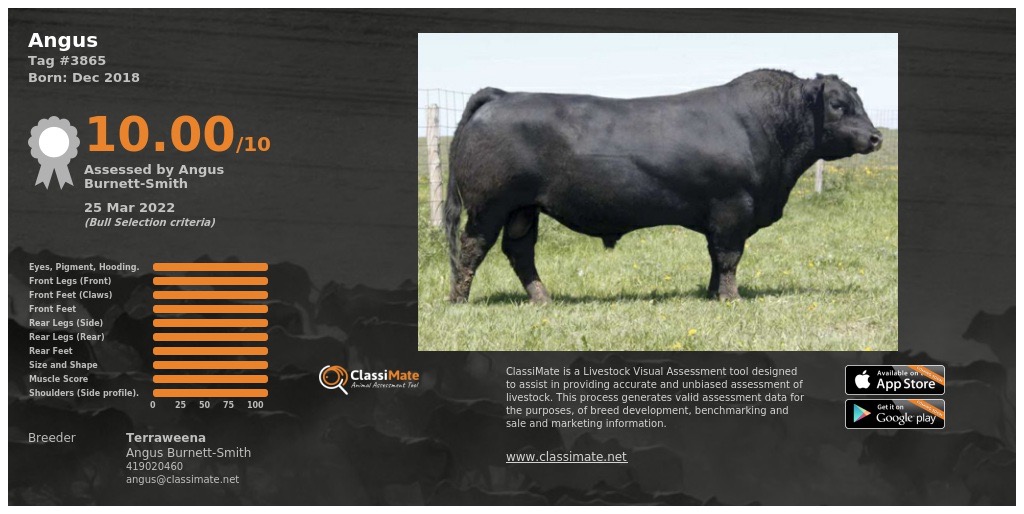 During the years of the ClassiMate App development, which required

1.    First to produce the concept, then

I have had many hours to consider the un-anticipated uses of the application when put in the hands of a growing user base.

Obviously, in any robust business case, you consider the potential for the misuse of the tools for commercial gains and for which we have incorporated features to combat such occurrences.

These occurrences have existed long before ClassiMate and will exist long after ClassiMate. But, at least by using ClassiMate a substantial light shines on the shadows and the Structural data offers complete transparency.

Since the platforms release and a dramatic uptake of Structural Assessment (with now well over 5000 Cattle, Sheep and Goats assessed) I have witnessed something that hadn’t occurred to me in all my hours of contemplation.

Yes! It is around the Perfect ClassiMate (CM) score of 10. But it’s not what you think!

Throughout the 1000’s of Assessments (both Self Assessed or Independently Classified) a very limited number have secured the statute of ‘a perfect 10’. In my mind there are two types of animals that score perfect CM 10’s in the system.

1.    Animals that by any reasonable observer’s opinion and from its photo – is a highly credible CM 10.

2.    Animals that obviously have faults that are clearly visible in the photo and the breeder has provided an inaccurate assessment either through misuse of the platform or (more likely) through simply not being able to identify slight faults. Perfectly understandable given the variety experience amongst ClassiMate users. The result here is a slightly diminished level of confidence in the credibility of assessments in the eyes of potential buyers across the catalogue.

It’s the first example that my observations relate too.

Its only through seeing literally 1000’s of Independent and Breeder assessments from all calibres of confidence levels and across a multitude of breeds – that I have had an unexpected epiphany.

When reviewed by an independent observer and compared against a catalogue of identically assessed animals, a CM 9.75 (for example) is far more credible and enticing for a buyer to act on then a CM 10!

Put yourself in the shoes of a buyer who is scrolling through comparable animal assessment data using photos and CM scores as their primary guide. It’s highly probable that when seeing a CM 10 (sometimes multiple 10’s) a buyer might initially roll their eyes with the assumption that it’s unlikely that the animal is actually a CM 10 and more likely that the assessor has missed key trait features.

When the same breeder scrolls to an animal photo that catches their eye and a score of 8.5, 9.3 or 9.7 (or anything similar) the buyer is instantly reassured that a thorough assessment has been done on this clearly elite animal and the assessor has very critically “slightly” downgraded subtle faults. That’s where buyer confidence is born.

Of course, there are animals that are legitimate 10’s and an assessor should have the confidence to award them as such when they see it- but it’s in the assessment of the rest of the draft that the assessor develops the credibility in the eye of an independent observer.

Yes- of course they do. But they always deserve another look, a more critical assessment will always win favour in the marketplace.